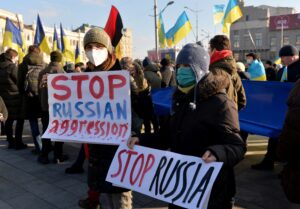 If the West forces Kyiv to accept Putin’s diplomatic terms, he will have succeeded without firing a shot.

By Oxana Shevel and Maria Popova

All outward signs point to an imminent Russian invasion of Ukraine. U.S intelligence has suggested that Russian president Vladimir Putin could order an attack within the next several days, before the end of the Winter Olympics in Beijing. Amid the mounting signs of war, European leaders have initiated a fresh round of shuttle diplomacy in order to prevent bloodshed. After talks in Moscow and Kyiv, French president Emmanuel Macron seems to think that speeding up the implementation of the Minsk accords is the key to ending the conflict. The two agreements, signed in 2014 and 2015, were intended to end the fighting in eastern Ukraine and provide a framework for the return of Russia-controlled separatist areas in the eastern region of Donbas to Ukrainian sovereignty. Macron and his European colleagues are grossly mistaken. Ironically, not only does the diplomatic solution they appear to be gravitating toward reward Russian aggression and pose a long-term danger to Ukrainian sovereignty and democracy, but it may fail to avert war.

The agreement that European leaders are pushing is flawed for a significant and fundamental reason: It accepts Putin’s preferred reading of the ambiguous Minsk agreements, giving Russia de facto control of Ukrainian policies. Moscow has long sought a constitutionally guaranteed “special status” for its proxies in Donbas. This would allow Russia to effectively veto any domestic and foreign policy decisions made in Kyiv. Understandably, this is unacceptable to Ukraine. The United States and its European allies have consistently said they would not agree to bar Ukraine from NATO membership forever. But if the West now pushes Ukraine to accept Russia’s demands on Minsk, Ukraine’s chances of ever joining NATO will disappear, as Putin will have the power to block the move from within.

On its face, an agreement on Russia’s terms might seem like a good exit for everyone. France and Germany could reap the reputational reward of serving as successful peace brokers while preserving NATO’s open-door policy. Ukraine could avoid a massive military invasion and, on paper, keep the option of joining NATO in the future. Even if some Ukrainians are dissatisfied with certain aspects of the Minsk agreements, tasking their government with smoothing over domestic opposition seems like a reasonable price to pay in exchange for preventing further invasion and getting a chance to reincorporate some of the eastern territory lost in 2014. The West will be able to congratulate itself for deterring Russia and protecting Ukraine.

Curiously missing from this picture is what Russia gives up in the deal and how it—and the conflict it supposedly solves—came about in the first place. If Ukraine is forced to implement the Minsk accords to Putin’s satisfaction, Russia will have to concede little beyond allowing NATO’s open-door policy to remain in place and spending the money to move its troops back to their bases. In the process, it would attain a major objective—a permanent lever for interfering in Ukraine’s domestic politics and paralyzing its pro-Western ambitions, potentially in perpetuity, without firing a shot. Even worse, forcing Ukraine to agree to Russia’s version of the Minsk accords may not even forestall military invasion. The domestic unrest in Ukraine that could follow a perceived “capitulation” would give Russia the pretext to invade Ukraine that it now lacks. Russia has recently handed out more than 600,000 Russian passports to people in Donbas. If large protests break out, Moscow could use them as a rationale to send in Russian “peacekeeping” forces to quell the unrest and protect its new citizens in Donbas.

Pressuring Ukraine to implement the Minsk agreements on Russia’s terms is a bad idea for the West and a serious threat to Ukrainian democracy and stability for several reasons. Most fundamentally, the West would be tacitly accepting Russia’s false narratives about the Donbas conflict. Russia maintains that it is not a party to the conflict, but only a mediator in an internal dispute. The conflict in Donbas, so the Russian narrative goes, was caused by the West-orchestrated “coup” in 2014 that overthrew former Ukrainian president Viktor Yanukovych, prompting the pro-Russian population in Donbas to rebel against the supposedly illegitimate nationalist government in Kyiv. Substantial anti-Kyiv sentiment did exist in Donbas after Yanukovych’s ouster, but Russia’s role in jumpstarting and sustaining the Donbas insurgency is well-documented.

In Donbas, the two Russian-controlled areas—the so-called Donetsk People’s Republic and Luhansk People’s Republic—arose from the 2014 “Russian spring” project, when Russian undercover operatives led local actors dissatisfied with the change of government in Kyiv in a series of mass protests and government-building takeovers. Moscow did not simply instigate the insurgency. When the Russian spring failed in most of southeastern Ukraine and the Ukrainian army succeeded in retaking some separatist-held territory in Donbas, Putin weighed in militarily with regular forces. As Russian and rebel forces trounced the Ukrainian army in the battles over Illovaisk and later Debaltseve, Ukraine’s then president, Petro Poroshenko, was forced to sign the two Minsk agreements in August 2014 and February 2015.

Russia’s direct involvement in the Donbas conflict is a basic fact. Those who back a diplomatic breakthrough based on the Minsk agreements should reject Russia’s arguments that it is not a party to the conflict and that Ukraine must negotiate directly with the self-proclaimed leadership of the “people’s republics” with Russia acting as a mediator. Russia’s refusal to acknowledge its true role is the key reason why no progress has been made in implementing the agreement after seven years. If the West now pushes Ukraine to satisfy Russia on Minsk, it would be forcing Ukraine to accept Putin’s version of reality—a reality that is based on the fiction of Russian neutrality in a conflict that it created. Putin would be further rewarded when Western sanctions are lifted once the Donbas conflict is “solved.”

Imposing the Minsk agreements on Russia’s terms would also threaten Ukraine’s fragile democracy. In a December poll, half of Ukrainians agreed that some compromises are needed to settle the conflict, but only 15 percent nationwide supported accepting “whatever compromise is necessary.” Even in the East, where people have suffered the most, less than a third supported this option. Given these attitudes, pressuring the Ukrainian government to fold on Minsk is fraught with danger. In 2015, an attempt to add a measure on Donbas autonomy to the constitution led to riots and several deaths. Since then, more Ukrainians have died and been displaced, and Ukrainian soldiers regularly return home in body bags. Conflict fatigue has not increased people’s willingness to compromise. If anything, it has hardened attitudes. If President Volodymyr Zelensky is forced to concede on Minsk, he could be toppled in another popular mobilization. A third and violent Maidan would undermine Ukraine’s fragile democratic process. It would shift attention away from judicial and anticorruption reforms, which after years of painstaking efforts by local civil society and international experts are finally on the cusp of bearing fruit. It would be a boon for far-right radical nationalists, as their demands to resist capitulation will resonate with many in society at large.

What should the West do instead?

Solving the current crisis may necessitate a comprehensive pact extending far beyond Minsk. An agreement on the Donbas conflict could be a part of the settlement, and the West should pressure both Russia and Ukraine to admit to facts on the ground and renegotiate Minsk so that it will be a compromise relative to each party’s preferred stance. Ukraine’s leadership—and a majority of the Ukrainian people—would prefer for Donbas to be reintegrated as just another region in Ukraine, the status it had before the conflict. If Ukraine is expected to treat the region differently because it was defeated by Russian and Russia-backed armed forces in 2014, then Russia should likewise be expected to compromise instead of being rewarded for its earlier aggression with its ideal settlement.

Any eventual compromise that would achieve lasting peace and safeguard Ukraine’s sovereignty should accomplish two objectives: Russia should not be allowed to use its Donbas proxies to gain power over Ukraine’s national policies while continuing to deny its role in the conflict. Ukraine should guarantee the linguistic, cultural, and other rights of the Ukrainian citizens in Donbas who differ (even more so now than in 2014) from the rest of the population in their political preference and attitudes toward Russia. Diplomacy should focus on how to achieve these two goals.