How Democracy Can Win Out in Sudan 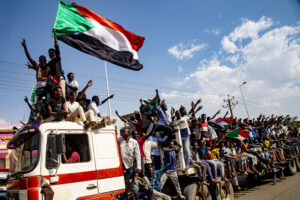 The country just got a new chance to restore its democratic transition. Here’s how they can ensure that Sudan stays on the right path.

One month after being ousted in a military coup, Sudan’s Prime Minister Abdalla Hamdok is back in office. However, his reinstatement has not satisfied protesters. They are demanding full civilian control over the transition, not simply a return to joint control with the military. To achieve that, protesters will need to double down on the very factors that helped them initiate the democratic transition in 2019.

In a recent Journal of Democracy essay, I explained why Sudanese protesters—unlike their Algerian counterparts—were able to convert their 2019 revolution into a democratic transition. I highlighted three key factors: 1) a highly organized and unified protest movement, 2) a regime divided between the military and paramilitary, and 3) a united, international front pushing the military to negotiate. These factors, in turn, enabled Sudanese protesters to reach a power-sharing deal with the military two years ago.

Over the course of the transition, however, each of those advantages waned, with the protest movement fragmenting, military forces unifying, and the international community dividing. Each of those shifts facilitated the October 2021 military coup. Yet, each still posed a sufficient threat to General Abdel Fattah al-Burhan, forcing him to reinstate Hamdok on November 22. To safeguard their transition and push the military even further, protesters today must fully reverse each of those shifts: reunifying the protest movement, dividing the regime, and securing united international support.

The Forces of Freedom and Change (FFC), a broad coalition of opposition political parties, armed rebels, and civil society organizations, led the protest movement against former autocrat Omar al-Bashir in 2018–19. The FFC and its backbone, the Sudanese Professionals Association (SPA), provided the movement with a strong organization and helped it to negotiate the pact with the military.

Over time, however, the FFC fragmented. Frustrated by the slow pace of reform, the Sudanese Communist Party, the National Umma Party, and even the SPA withdrew from the coalition. While most groups eventually returned to the FFC, several of the armed rebel groups in the coalition that had signed the 2020 Juba Peace Agreement (and in so doing had become ministers and governors) then splintered off into the Charter of National Accord in early October 2021, calling for the dissolution of Hamdok’s government. In a case of strange bedfellows, the leaders of Darfurian rebel groups—Minni Minnawi of the Sudan Liberation Movement and Gibril Ibrahim of the Justice and Equality Movement—allied with the very military they had long fought against, spearheading protests calling for military intervention. As Salah Ben Hammou observed, the Charter members’ endorsement gave the coup a veneer of civilian support.

In securing the defections of Minnawi and Ibrahim, Burhan was following the example of Egypt’s General Abdel Fattah al-Sisi, who mobilized mass protests in support of his coup in 2013. Burhan miscalculated, though: Far more people mobilized against the overthrow than for it. Undeterred by repression, the sustained protests against the coup eventually forced Burhan to reverse course. To push him further, the FFC will need to stand united against the military’s divide and conquer tactics.

A rift between the army, led by Burhan, and the Rapid Support Forces (RSF), a paramilitary led by warlord-turned-general Mohamed Hamdan (Hemedti) Dagalo, helped make the 2019 transition possible. Yet Prime Minister Hamdok failed to exploit these divisions, instead managing to alienate both the army and RSF—giving them reason to join forces to overthrow the interim government.

In particular, Hamdok’s push for transitional justice and civilian control threatened both the army and RSF. In October 2019, Hamdok formed a commission to investigate the 3 June 2019 massacre, an investigation that could implicate both Burhan and Hemedti. The prime minister tasked a second committee with recovering assets and funds plundered by the Bashir regime, which investigative journalist Mat Nashed notes “threatened core patronage networks within the military.” Indeed, some of Burhan’s first moves after the coup were to dissolve these two committees. Finally, Hamdok’s push to institute civilian control, including by bringing some military-owned companies under civilian management, likewise threatened the interests of the army and RSF. Burhan was also scheduled to turn over chairmanship of the Sovereignty Council to civilians in November, a fate he sought to preempt with his coup.

To push the security forces out of politics and allow a truly civilian-led transition, protesters will once again need to exploit divisions between Burhan and Hemedti. While the army and RSF may be cooperating for now, divisions between them remain. During the transition itself, Burhan had proposed integrating the RSF into the military. Hemedti outright refused. Exploiting such discord, and having these forces counterbalance one another, will help to prevent them from coordinating another military coup.

In 2019, there was united international support for a transition—with even Saudi Arabia and the United Arab Emirates, who usually suppress prodemocracy movements, pressuring the Sudanese regime to negotiate after the June 3 massacre of protesters raised the specter of instability and civil war.

By October 2021, however, the international community had split. While the United States and Europe remained committed to the transition, the Gulf states, Egypt, Israel, and Russia are all thought to have supported the coup. Burhan reportedly traveled to Egypt hours before his takeover to get Sisi’s assurance of regional support. Russia allegedly greenlit the coup ahead of time as well, promising to block UN sanctions.

However, the reaction from Western and African corners was fierce. The United States immediately suspended $700 million in economic assistance, and the World Bank halted disbursement of $2 billion in aid. The African Union suspended Sudan’s membership, and the UN Security Council called for the restoration of Hamdok’s government. Burhan found himself increasingly isolated, and eventually caved to this pressure.

Moving forward, the international community will need to recreate a united front against the military. The United States and United Kingdom made an admirable start, pressuring Saudi Arabia and the United Arab Emirates to release a joint statement on November 3 calling for the “immediate restoration” of the civilian-led transition. Given the Gulf countries’ focus on stability and their wariness of Burhan’s links to Islamists from the old regime, they could be convinced to apply even more pressure on the military.

While Burhan’s reinstatement of Hamdok is a promising start, protesters know that simply returning to the status quo ante will not resolve the underlying tensions that led to the coup in the first place, and could allow Burhan to better prepare a coup next time around. The protests against the military accordingly show no signs of abating.

On the other hand, protesters also need to be wary of the lessons from Algeria, where the protest movement, refusing to negotiate, was simply ignored by the military. In Sudan, protesters should instead leverage their people power to push for a new, better deal—one that ensures full civilian control over the transition. This is a tall task, and will likely require some form of immunity and safe exit for Burhan and Hemedti. But if 2019 provides any lessons, such a deal may still be possible, particularly if domestic forces and the international community reunite and exploit the divisions between Burhan and Hemedti. Under sufficient pressure, both may agree to step down and allow a civilian-led transition. If so, it is possible for Sudan to regain its democratic bearings, even stronger than before.

Sharan Grewal is assistant professor of government at William & Mary and nonresident fellow in the Center for Middle East Policy at the Brookings Institution. His research focuses on democratization, religion, and civil-military relations in the Arab world.